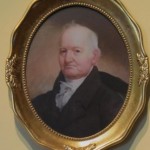 William Jones was born in Middlesex County, Virginia in 1750.  By the time he was 7, he and his brother were orphans, and were subsequently raised by their uncle.  In the early 1770’s, the two brothers heeded John Spotswood’s request and came west – to Spotsylvania County, VA.  Both married sisters, with William marrying Betty Churchill, a cousin, on 24 November 1774.  In 1785, a daughter, Hannah, was born.  By 1799, Ellwood was built.

On 14 February 1822, Hannah married John Coulter, and they soon moved to Richmond.  Six months later, William’s bother died.  In 1823, while visiting Hannah, Betty died, and was brought back to Ellwood for burial.  Suddenly, William was all alone.  John and Hannah Coulter soon moved to Chatham to be closer.  One bright spot during this sad time was the visit of General Lafayette and his son on 15 August 1825, and they were served breakfast by William and his staff.

Tired of the loneliness, William remarried on 31 July 1828, at the age of 77, to Lucinda Gordon, age 16.  On 21 June 1829, they dad a daughter, and named her Betty Churchill Jones, after his first wife.  Half-sister Hannah became a substitute mother, and began spending time at Ellwood, and young Betty spent quite a bit of time at Chatham, especially during the school year when she attended school in Fredericksburg.

William passed away on 15 November 1845, at the age of 95.  He left his estate to his wife Lucinda, as long as she remained a widow.  The widowhood lasted until October 1847, when she married John Strother Green.  She lost possession of William’s estate, but she had inherited her father’s estate, so she did well.  John and Lucinda moved to nearby Greenwood.  Everything now was owned by Betty.  On 19 October 1848, Betty married James Horace Lacy at Ellwood, with the ceremony being performed by his brother Beverly Tucker Lacy, a Presbyterian minister and future chaplain to General Stonewall Jackson.    Horace and Betty had their firstborn child, a stillborn son, on 27 September 1849.  On 31 August 1851, they had their second child, first daughter Agnes Alexander.  The family eventually included 8 children.  They spent the Civil War years in Bedford, VA.

John Mercer Woods is a descendant through Agnes’ daughter Bessie.  John remembers the stories Grandma Bessie would tell about visiting her grandparents, the Lacys, during the 1870’s and 1880’s.  The staunch Presbyterian faith that was instilled in Horace and Beverly still remains in the lineage today.  Bessie married James B Woods Sr, a Presbyterian medical missionary to China, and their children, including John’s father, Dr James B Woods Jr, were born there.  Dr Woods, Jr, practiced, first in China from 1923-1940, and later in Davidson, NC from 1942-1986.